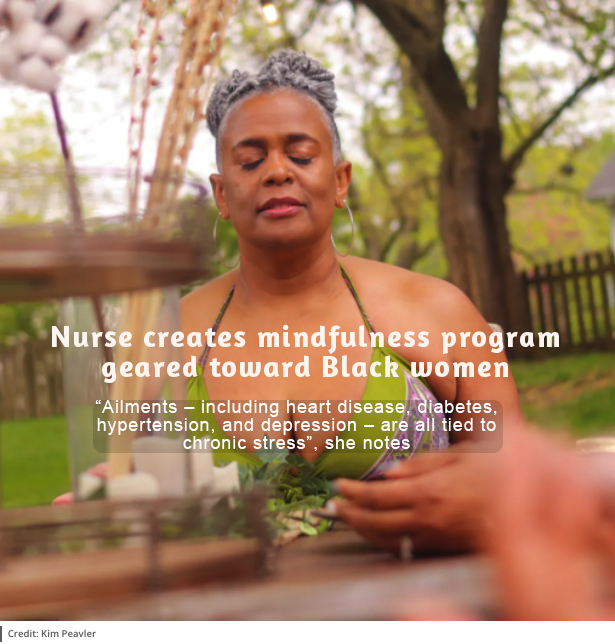 A nurse in Illinois seeks to help Black women focus on the moment and, along the way, help them improve their health. 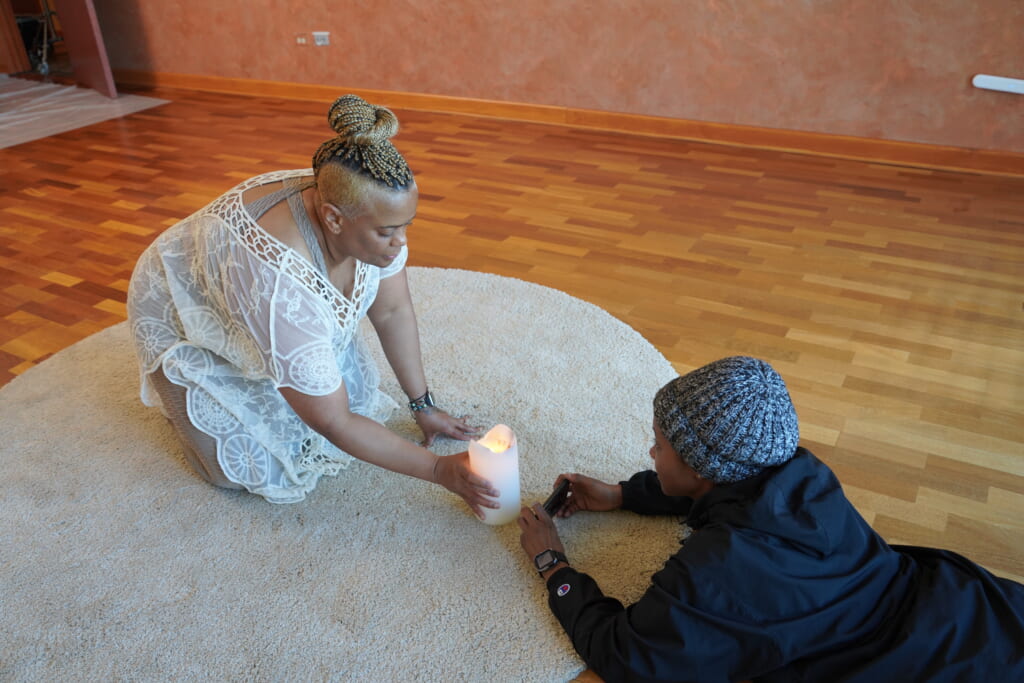 “Emotions are very much linked to chronic stress,” says Peavler, who expects to graduate in 2023 from Lesley University with a Mindfulness Studies master’s degree. Ailments – including heart disease, diabetes, hypertension, and depression – are all tied to chronic stress, she noted.

Those diseases disproportionately affect the Black community. Black women, for example, are 60% more likely to have high blood pressure than white women, according to the U.S. Department of Health and Human Services.

Mindfulness is defined as, “A mental state achieved by focusing one’s awareness on the present moment, while calmly acknowledging and accepting one’s feelings, thoughts, and bodily sensations, used as a therapeutic technique,” according to Google.

Mindfulness can, but does not always, include meditation.

Peavler says she began her mindfulness journey about a decade ago. She started a business and taught community classes on the subject. As a nurse, she knew she wanted to go back to school and get a master’s degree, but the traditional options didn’t interest her.

“I decided if I ever did go back to school, it would be for something that I felt was moving me or calling me,” she says.

Things crystallized in 2020. She found the Lesley program at a time she was experiencing a range of emotions, including sadness and anger over George Floyd’s murder and the isolation caused by COVID-19. She studied issues like internalized oppression, which helped her understand her feelings and how to effectively cope by remaining in the moment.

But during her studies, she realized mindfulness had not been researched from the perspective of Black women. That was another reminder, she says, of systematic racism (whether intentional or not) that permeates society.

“And then I realized, that if I was feeling this way, how many other Black women, people in the black community also feel this way?”

Describing the benefits of mindfulness, Peavler says, “It’s like when you’re really stressed. And if someone says something or does something to you, you have a short fuse. When you learn to take a breath and focus and be in the moment and allow the moment to be with it is, you may still feel angry.”

Mindfulness, she stresses, isn’t about dismissing emotions. “You learn … they come and they go. Some of those emotions that you’ve (felt) like shame, and guilt, and embarrassment, some of those things that you pushed away in the back, and you feel like ‘I don’t ever want to experience that level of sadness again,’ you begin to hold space for it and realize that I can feel this. And it’s okay; it will go away.”

Mindfulness traces its origins back 2,500 years with ties to Buddhism and other religions. Jon Kabat-Zinn, renowned as the most influential person in the mindfulness movement, led its acceptance as a secular and scientific practice in the late 1970s.

Since then, mindfulness has become a big business. Worldwide, the wellness industry has a $4.5 trillion market value and the meditation industry accounts for $1 billion, according to the Global Wellness Institute. Additionally, meditation among U.S. adults increased more than threefold, to 14.2% in 2017 from 4.1% in 2012, according to the Centers for Disease Control.

Faith Redding was a skeptic about the benefits of mindfulness, but decided to try it because of her personal relationship with Peavler. 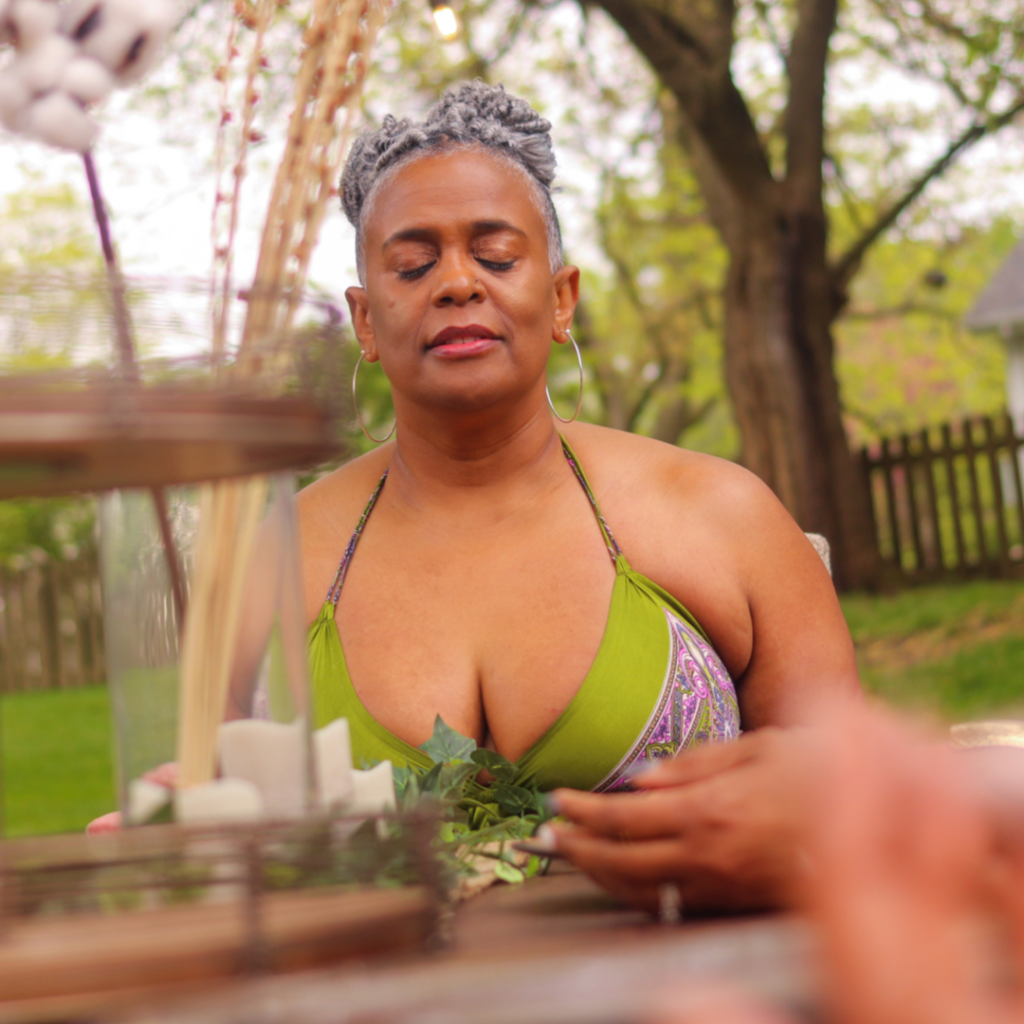 “Kim is so Zen,” Redding says. “Just hearing the way she speaks. I like her spirit. I suppose if I can be similar to her in the way I think I wanted to try it out.”

Now, Redding has converted. Mindfulness has helped her build a better relationship with her 16-year-old son, she discloses, because she focuses on the issue at hand.

Peavler has a lot on her plate. In addition to work and school, she has a business that focuses on the holistic lifestyle of Black women called Melan Mind.

Mindfulness “creates a bit of peace for you,” Peavler says. “You’re not bringing all of this baggage from past experiences into this moment. It’s like this moment is a new experience. And then I think it brings expansion in your life. You get to live a full life, rather than trying to pass through the moment.”